1. It might seem that Roberto Perotti, as an artist, has a different personality compared to his everyday life personality; as he would live two different lives: one inside the real world and the other one outside it. The latter is the one where he sends his images from. In fact, these images do not belong to his world, the one that he constantly shares with people close to him. There is nothing that could be linked to the images that we continuously experience in our everyday life and that he could be inspired from.

2. Someone said that in modern art, the artist is not painting anymore what he sees but instead what he feels. This has been brought to an extreme when someone said that in this way painting becomes a job for blinded people. However, what it is seen in Roberto Perotti’s paintings is not the result of an abstract imagination or a purely interior construction that has nothing to do with the reality. His paintings have forms (for now, I will identify them as “domes”) that can be traced back to the forms of the real world.
However, they do not show any familiarity with a determined reality or with a memory or with a dream. Why?

3. I believe that the answer to this question can be found in the hidden structure of his work. It is something that can not emerge from one work piece but only from the extraordinary occasion of looking at a group of art works that reflects a relevant part of his pattern.
The structure is musical. In fact, music is a type of art that takes the form of “variation” over time.
It is a variation on two linked themes; the first one is older and deeper and it is the one of the vertical colours modules. The second one is more recent and it is the one of the “domes”(later I will explain what they are). As in the tradition of the musical variation, the structure immediately appears repetitive, obsessive: it could be said that the same themes are represented.
This, however, would be a mistake made by looking each art work separately and not looking at the whole structure. In fact, it is by looking at the structure that it is possible to understand that the variation is the exact opposite of repetition.

4. The bond created between the love for the theme and the desire of escaping from it, always creates something different and it explores all the ways that begin from the start (the theme) and end back to it.
However, who can negate that if Bach and Beethoven continued “the Goldberg variations” and the “variations on the Diabelli walzer” would not continue them without letting people understand where they restarted from?

5. Thus, the “domes” and the colour modules in Roberto Perotti’s art pieces are linked to each other in infinite variations of a wonderful urban environment.
They also appear as “spirals” whose movement concentrates around a centre nevertheless to stand back from it and remaining in its orbit. The “domes” of Roberto Perotti are identifiable as such in a first phase but since long time they are not “domes” anymore: they became a demonstration of the same form that every time according to “variation” tries to adapt to an emotional an different content with few and defined iconographic differentiations in the drawing and in the colour.

7. voices of soul and mind
As in the musical “variations”, at one point there has been a loss of the initial theme of the dome which becomes an invisible analogy that slightly reminds the original idea through the changing forms that it takes on.
Once, the domes are huge dreaming planets that lower on the city; some other times they represent hot-air balloons that rise into the sky; while some other times they are abstractions without a defined form.
They were the sacred and now they are the vestiges of the sacred, but, as Jung said, they are still numinous; in fact, they are far from us; we are always outside them; we never enter inside and therefore their interiors remains unknown.
The domes of Roberto Perotti represent the dream of the whole. 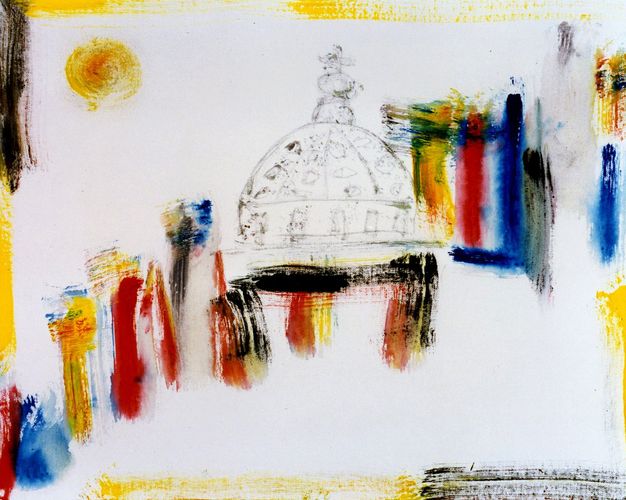 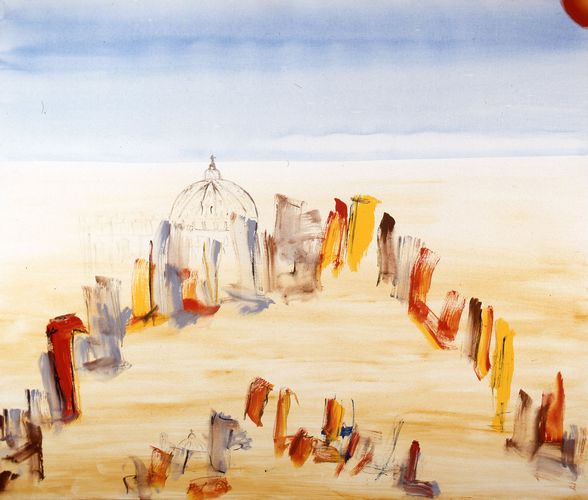 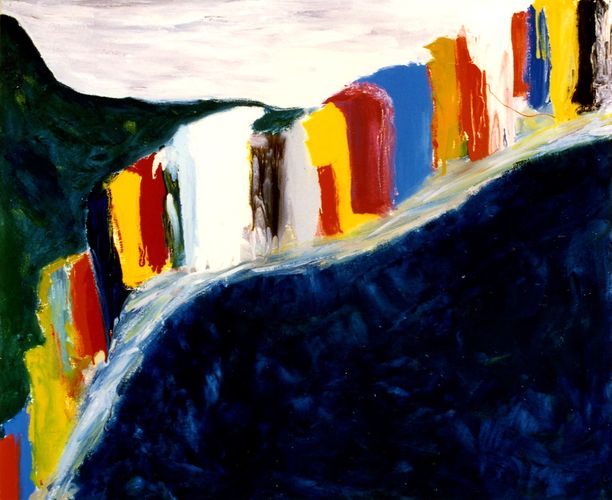 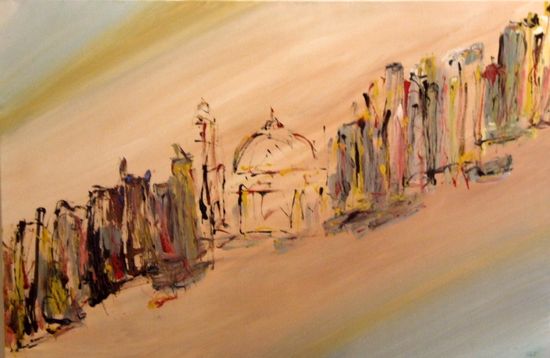 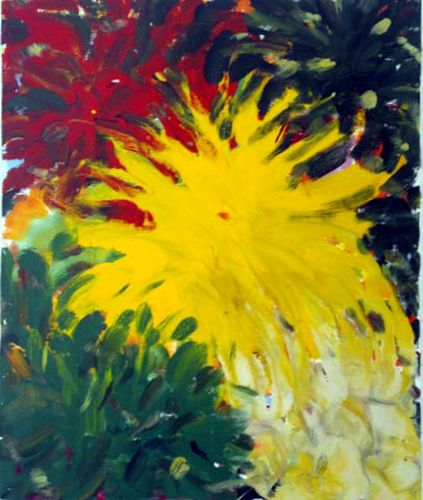 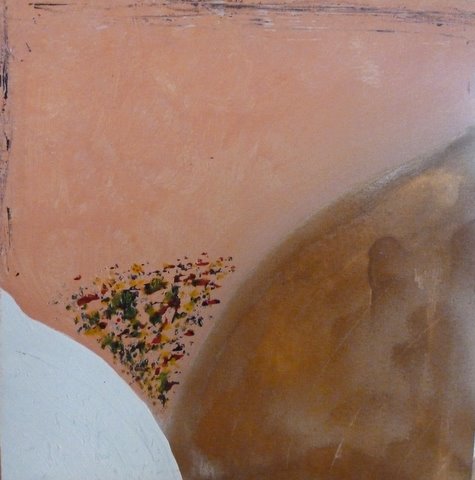 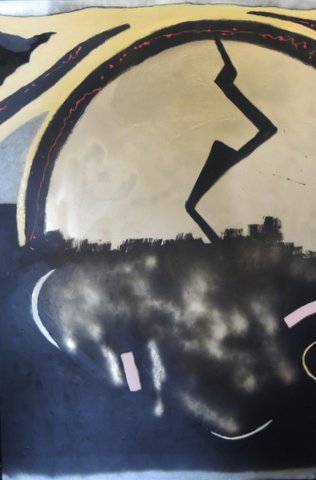 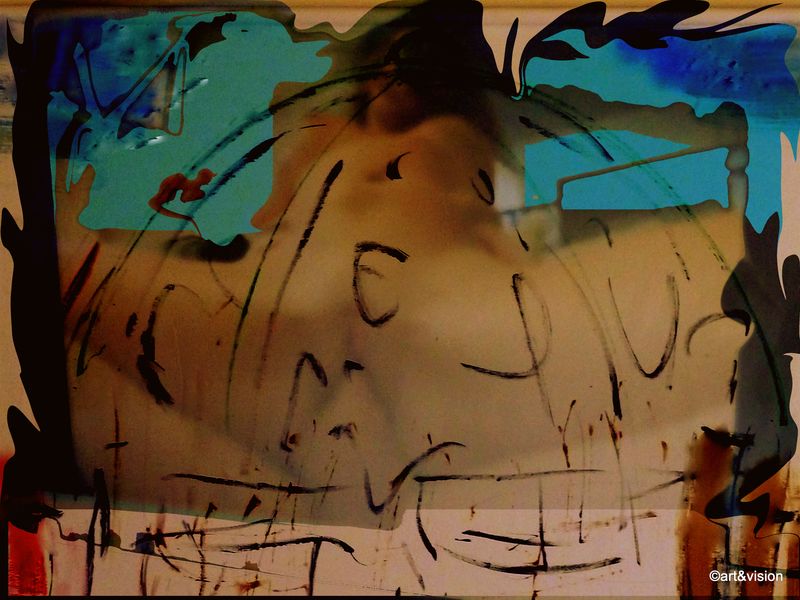 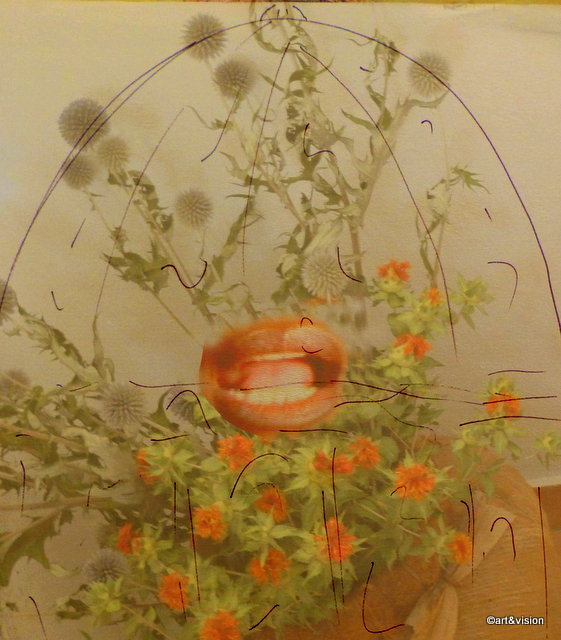